Alcohol’s Impact on Metabolism – Riding the Alcohol Train to Fatsville 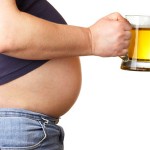 According to conventional wisdom, the infamous “beer belly” is caused by excess alcohol calories being stored as fat. Yet, less than five percent of the alcohol calories you drink are turned into fat. Rather, the main effect of alcohol is to reduce the amount of fat or carbohydrate your body burns for energy, along with increasing your appetite and dramatically decreasing your testosterone levels.

The nutrients protein, carbohydrates, and fat can be stored in our bodies, but alcohol cannot. For this reason, it takes priority over everything else in order to be metabolized; doing so means that all of the other processes that should be taking place in your body are being interrupted.

Rather than getting stored as fat, the main fate of alcohol is conversion into a substance called acetate. It is this sharp rise in acetate that puts the brakes on fat loss.

A car engine typically uses only one source of fuel. Your body, on the other hand, draws from a number of different energy sources, such as carbohydrate, fat, and protein. To a certain extent, the source of fuel your body uses is dictated by its availability.

In other words, your body tends to use whatever you feed it. Consequently, when acetate levels rise, your body simply burns more acetate, and less of everything else, including fat. In essence, acetate pushes fat and carbohydrate to the back of the line. Said more simply, when you have alcohol in your system, your body will use almost nothing (no fat, no carbohydrate) for fuel except acetate (alcohol); therefore, anything you eat during the time you have alcohol in your system will almost certainly be converted into body fat.

And it doesn’t stop there – not only does alcohol reduce the number of fat and carbohydrate calories you burn, alcohol can increase your appetite and lower your testosterone levels for up to 24 hours after you finish drinking.

Studies have shown that in the short term, alcohol stimulates food intake and can also increase subjective feelings of hunger. Why do you think you are ALWAYS asked if you’d like a drink before you eat at a restaurant? One study showed a 20% increase in calories consumed at a meal when alcohol was consumed before the meal. There was a total caloric increase of 33% when the calories from the alcohol were added. These additional calories can quickly contribute to weight gain and/or put the kibosh on weight loss.

Not only does too much alcohol put the brakes on fat loss, increase your appetite and cause you to stuff yourself, it’s also one of the most effective ways to slash your testosterone levels. Just a single bout of heavy drinking raises levels of the muscle-wasting hormone cortisol and increases the breakdown of testosterone for up to 24 hours. The damaging effects of alcohol on testosterone are made even worse when you exercise before drinking – bad news for those of you that workout before a night on the town. This drop in testosterone will decrease muscle repair and muscle building, lowering your metabolism even further.

So, what’s the bottom line?

Your waistline isn’t going to balloon overnight after a few drinks. However, alcohol will cause you to burn less fat, eat more and decrease your testosterone and metabolism. Over time, this will lead to detrimental changes in your health, including (most likely) packing on a few pounds – or making those pounds harder to lose. While the odd drink now and again isn’t going to hurt, the bottom line is that alcohol and a leaner, stronger body just doesn’t mix.